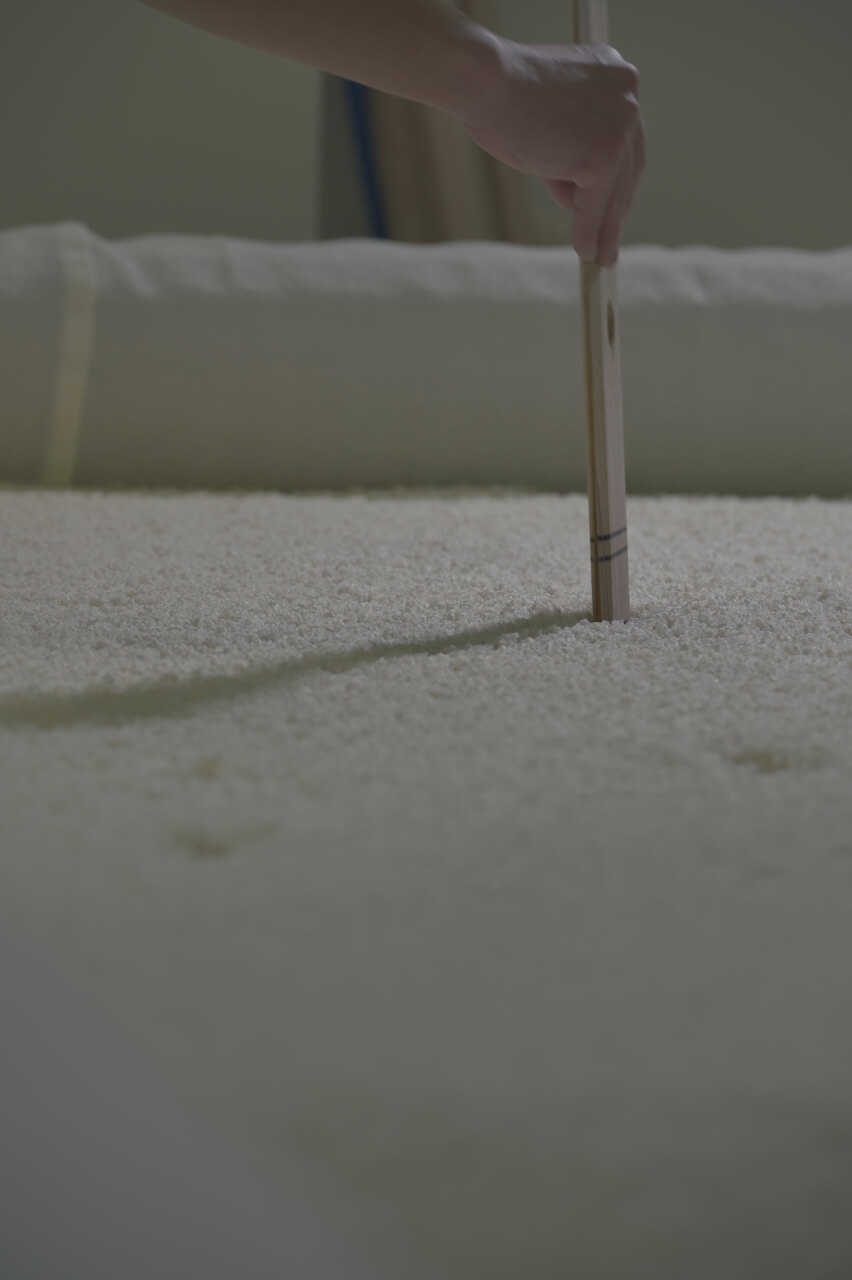 There's an old Japanese saying that the most important step in brewing sake is preparing the koji rice.

The process begins by cooling freshly steamed rice to the optimal temperature. The rice is taken into a special room called the koji muro, where it is spread evenly over a table and gently pressed to separate each grain. This sarashi, or exposing of rice to air, takes place frequently at Kokuryu, where premium ginjo sakes account for much of our production. These premium sakes require such close attention that they are brewed only in small batches, with almost every step done by hand. Brewery workers tend to the rice until it achieves an optimal state — slightly hard outside and soft within — in 40-degree temperatures (104 degrees Fahrenheit) in a laborious process that can take four to five hours.

When the sarashi is completed, the rice is crumbly and buoyant. At this point the master brewer disperses koji mold spores onto the grains, a step known as tanekiri. He pours the tane-koji (also called moyashi, or granulated koji mold spores) into a glass cup and covers the cup with a fine-mesh fabric. Then, raising the cup high, he sprinkles the spores evenly over the rice. He does this in 30 seconds, during which no one enters or leaves the room, not a word is uttered, and everyone holds his breath to ensure the spores fall evenly and uniformly on every grain of rice.

After this the cultivated koji rice is covered with a cloth and kept moist until the spores begin to germinate. This usually takes a whole day and night.

Then the art of koji rice-making begins. From this point the wisdom and experience of the daishi—the master koji rice maker—come to the fore. If the koji rice gets too warm, the spores' growth will be uneven, resulting in poor sake. So the daishi monitors conditions constantly to make sure they remain optimal. If the rice grows cold he'll cover it with cloth; if it gets hot he'll ventilate the room. Through the night he'll wake up every two or three hours to check on the rice.

During this critical time the daishi is like a mother tending to her newborn baby. And the koji rice, showered with attentive care by the dedicated master brewer, the daishi and other brewery workers, is ready after three days.

Note: Koji mold (aspergillus oryzae) creates enzymes that convert the rice starches into sugars which can then be fermented to produce alcohol.